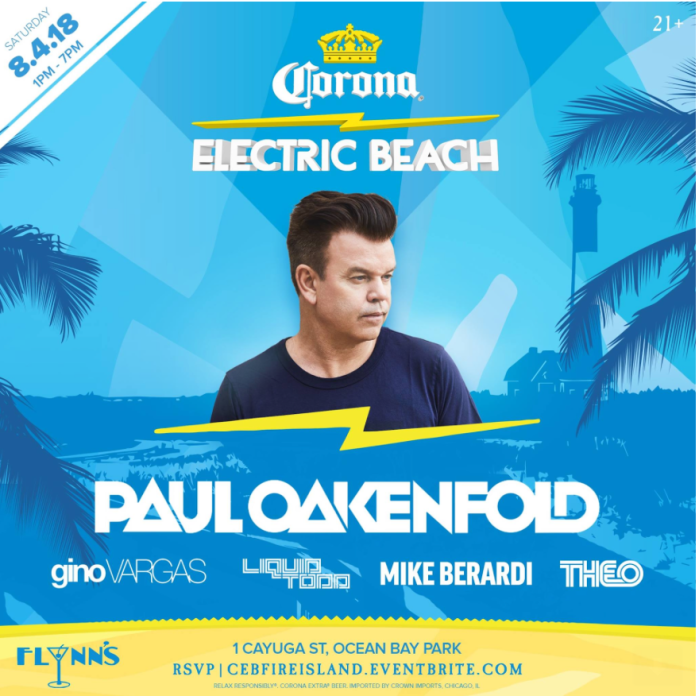 It seems the Summer is just heating up on the Island of Fire as Flynn’s of Ocean Bay Park gets ready to welcome one of today’s brightest stars in the electronic music world – DJ Paul Oakenfold for Corona Electric Beach 2018!

The event will kick off at 1PM at Flynn’s (1 Cayuga St, Ocean Bay Park, NY) with a slate of local DJs including Gino Vargas, Liquid Todd, Mike Berardi, and THEO getting the party started “Where Beats Meet the Beach”!

When it comes to a career the magnitude of Paul Oakenfold, it’s hard to encompass one of the true legends of electronic music into just words. For over 3 decades he has elevated and shaped an entire genre and remains one of the leading forces in the global music scene today. His most recent works have taken him from the DJ booth of the worlds hottest night-spots and festivals to the studio producing soundtracks for Hollywood blockbuster movies. His diversity in artistry and ability has earned him accolades from critics and fans alike. Garnering him not 1 but 2 Grammy Nominations for his works. Paul has produced for megastars such as U2, Madonna, and The Happy Mondays.

But Oakenfold’s stature as a DJ and entertainer has taken him beyond the normal club and festival circuit, playing landmark gigs that have changed the face of electronic music. Highlights include three worldwide tours warming up for Madonna and U2 (with both artists insisting on a DJ set from Paul instead of a support band); performing on the Great Wall of China and two sold out dates playing to 30,000 people at the Hollywood Bowl in California.

Now, as the DJ megastar comes to Flynn’s on Saturday, August 4th – fans can pack the Fire Island Ferries over to Ocean Bay Park in droves at Flynn’s Presents Corona Electric Beach!