With Latest Release “Broken Wings”, The Young Star Displays Her Strength Through Trying Times As A Message To All Those Combatting Their Own Demons

Overcoming hardship and transforming it into triumph through music is nothing new, but it takes a unique talent to do it in a way that truly leaves an impact on one’s psyche. Such is the case with Singer-Songwriter Izzy Escobar, whose debut single “Broken Wings” (Available everywhere digitally on June 29th!) showcases her commanding attitude and powerful vocal prowess in very distinct fashion.

With “Broken Wings”, subtle synth work and a stomping beat lay the groundwork for an alluring lyrical journey of determination shining through pain as Escobar sings “Right here in my place all these walls suddenly disintegrate // Into dust, into here, it flies away out of the atmosphere // And I feel like I can fly with broken wings”.

Izzy Escobar’s music is about loving one another the way we want to be loved ourselves.  And having FUN along the way! Rising from a “never ending circle of violence” from an abusive stepparent, where she was voiceless in protecting her own family members, she began channeling that pain into lyrics–and eventually songs–at a very young age. “I began to write words, and soon realized that I could synchronize the words in my diary with the tune in my head” says the Massachusetts native, whose latest singles show how far she’s come from that frightened girl to a strong, capable woman who wants to spread her message of hope and strength to those who may face their own struggles. “A few years later, as I read through that same songbook, I noticed that I had made a shift from finding my voice to helping those who couldn’t find their own”.

As she continued on her musical journey, Escobar took to not only writing and singing, but reading sheet music and studying music theory, as well as playing the violin, guitar, and piano. “I believe that to be a healthy human being, we must have an idea of who we are, and what our existence is. But the promise of a home safe from physical abuse and fear remains elusive for many millions of women and children in this country. Now an accomplished singer/songwriter and multi-instrumentalist, she continues to channel her strengths into giving a voice to the voiceless, and helping those who face the same fate as she had in her youth.

Following His Mother’s Death From Ovarian Cancer, The Director Set Out to Create A Film That Captures The Experience of True Love and Loss 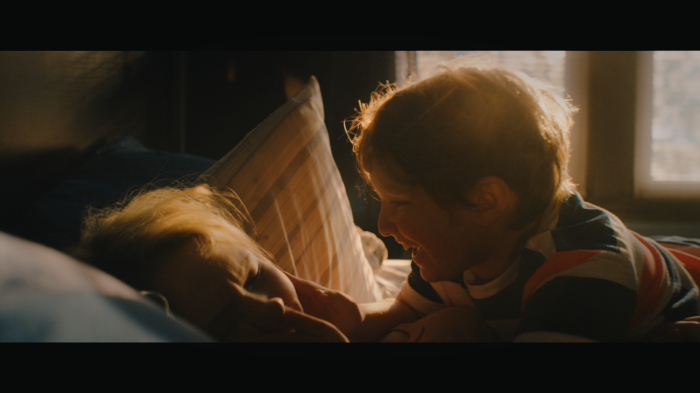 When Filmmaker/Writer/Director Adam Lawrence lost his mother to ovarian cancer in 2016, he vowed to make a film that had an impact on others while also educating the public in an effort to help those going through similar circumstances. His short “Mournings” does just that.

“I wanted to make a short that highlights what going through ovarian cancer is really like,” he says. “I feel that my mom’s voice will be heard through this film, and I want to raise awareness. If this short helps even one person to diagnose any sort of illness, then my job is done.”

The film, based on his own experience, stars Alex Forstenhausler, Christian Kalner, and Vincent Ticali and was produced by Lawrence’s own Beast of the East Productions. It highlights the trauma that a family experiences when a boy’s mother dies of ovarian cancer. The audience is able to witness this loving mother-son relationship develop from boyhood to manhood. We see the comparisons between him saying goodbye to his fish as a boy, and having to say goodbye to his mother as an adult. As we watch her die, we see what an incredible mother she was and the impact that she had on her son’s life. The true beauty of this movie is in their relationship, and watching him having to learn how to let go.

Adam Lawrence is a born and raised New Yorker with hustle in his blood. As a filmmaker and Co-Founder of Beast of the East Productions, he has been directing and producing visuals for the past decade. He has always set out to create material that one could relate to, and with his latest film it presented the most difficult challenge yet… a movie on Ovarian Cancer. After having lost his mother to an almost 4 year battle with the disease, he set out to try to build awareness on this type of Cancer that often isn’t spoken about.

Lawrence directed, produced and even crowd funded the 9 minute short as a one man show, with the efforts of many contributors making it possible to shoot the film in June of 2017. Since setting out on this journey to create awareness and speak about Ovarian Cancer, Adam was featured in The Long Island Herald, Patientworthy.com and the “Changemakers” segment on WPIX Channel 11, New York.

With the goal of springboarding this short into an feature film and teaming up with celebrities and others that have been impacted by this disease, it seems this is only the beginning of the filmmaker’s journey.

For More Information on Adam Lawrence and Beast of the East Productions, VISIT:

After Performing All Over NY and Her Recent Anti-Bullying Tour On Both The East and West Coasts, She’s Excited to Hit the Stage at One of LI’s Oldest Amusement Parks!

Having released multiple songs and music videos like “Strangers In Love” and  “Fear to Be Loved”, Singer/Songwriter Ali B is getting ready to hit the stage at Adventureland Amusement Park (2245 Broad Hollow Road (RT.110) Farmingdale, NY, 11735) on Friday, August 17th !

Ali B grew up in the bustling concrete jungle of New York City, known for its thriving music community and inspiring so many young talents of today. Later moving to Long Island, she used that inspiration – turning it towards her love for music and already thriving vocal ability.

Inspired by some of today’s biggest pop music sensations from Selena Gomez to Ariana Grande, she began performing cover songs and later writing her own original music with the help of Klang from MTV’s “Making The Band 4” and Artist / Engineer LaPorte.

WATCH: Ali B “Fear To Be Loved: Official Video

Noting some of her favorite experiences on her musical journey thus far, Ali says “Every new experience is my favorite, and all of the steps in this journey mean I’m one step closer to reaching my goals”.

Having already gained so much success on her road to continued music development as an artist, songwriter, and performer – she advises other young talents like herself to strive for greatness, saying they should never give up, and adding “nothing is impossible, if you find something you love go out there and give it all you got!”.
With more to come from Ali B in 2018, fans have plenty reason to check out this up and coming star as she performs at Adventureland Amusement Park, Friday, August 17th!

To Purchase Ali B’s“Fear To Be Loved” via iTunes, VISIT: https://apple.co/2F4oDJe

LISTEN: Ali B “Fear To Be Loved” via Spotify

To Check Out “Strangers In Love” via iTunes, VISIT: http://apple.co/2xj4KZZ

LISTEN: Ali B “Strangers In Love” via Spotify

For More Information on Ali B, VISIT: www.AlisonBerkeMusic.com