New Exhibitors, Media Partners, and Sponsors Adding to the Continually Growing Popularity of One of the Biggest Guitar Shows on the East Coast 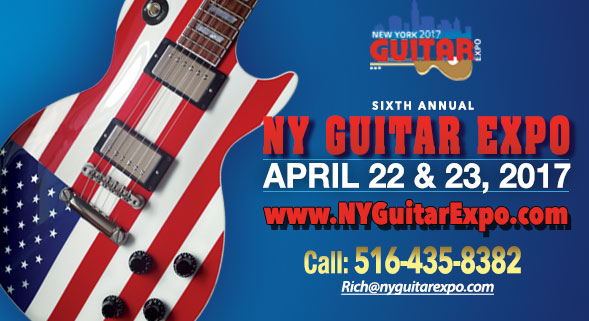 The 6th Annual NY Guitar Show & Exposition is proud to announce that many new exhibitors have signed on for 2017! More than a dozen new exhibitors attendees of the past five years have not seen before are joining in on the excitement at the Freeport Recreation Center(130 E. Merrick Rd. in Freeport, NY) Saturday, April 22nd & Sunday, April 23rd, 2017 in Freeport, Long Island!

“While I knew our sixth year was going to be larger and better than ever, calls are still coming from MI, CA, and other states around the country, some at the last minute, from dealers looking to exhibit at this year’s expo,” show founder Rich Johnson said.

New sponsors, exhibitors and media partners are looking to join in on what has fast become the quickest growing Guitar Show on the east coast, tripling in size since our inception in 2012.

“There’s no shortage of incredible people in this area to support the eclectic music scene that makes the NY Tri-State region the music bed the entire world wants to jump into. We’re hoping just a small fraction of that “world” comes to partake in the eclectic show we have put together,” added Johnson

This show has become a fan favorite with vintage gear & guitars, retailers, manufacturers, private collections etc., all so anyone walking through the front door can participate in some way large or small!